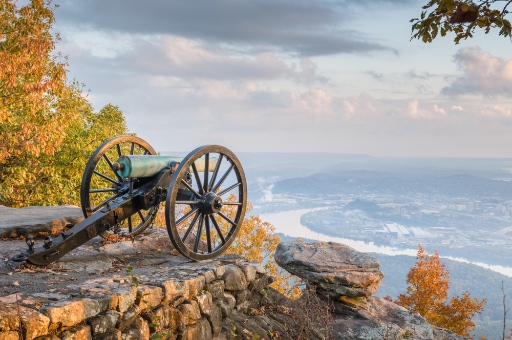 Native Americans were the first people to live in the Chattanooga area. Throughout the Archaic, Woodland, Mississippian/Muskogean/Yuchi (900–1714 CE), and Cherokee (1776–1838) periods, sites going back to the Upper Paleolithic epoch (ca. 10,000 BCE) reveal continuous human habitation. The Chickamauga Mound, near the mouth of the Chickamauga Creek, is Chattanooga’s oldest (ca. 750 CE) visible art.

Up until 1915, the Citico village and mound site was Chattanooga’s most important Mississippian/Muscogee landmark. The Muskogean word cvto /cht/ – ‘rock’ is the source of the first half of the name “Chattanooga.” The latter could be derived from the regional suffix -nuga, which means “to dwell” or “to live.” It’s also thought to come from the Creek Indian word Chat-to-to-noog-gee, which means ‘rock rising to a point.’

Dragging Canoe split from the main tribe in 1776 to build opposition to European settlement during the Cherokee–American wars, and this is when the territory was first occupied by Cherokees. Ross’s Landing was founded in 1816 by John Ross, who subsequently became Principal Chief. It was one of the hubs of Cherokee Nation settlement, which spread into Georgia and Alabama, and was located along what is now Broad Street.

The Cherokees, along with other Native Americans, were forced to transfer to Indian Territory in what is now Oklahoma by the United States government in 1838. Because of their banishment and deaths along the route, their trip west became known as the “Trail of Tears.” The United States Army used Ross’s Landing as one of three main internment camps, or “emigration depots,” where Native Americans were confined before embarking on the Trail of Tears trek.

The city of Chattanooga was founded in 1839 when the town of Ross’s Landing organized. The city flourished swiftly at first, owing to its advantageous location for river commerce. Chattanooga became a boom town after the railroad arrived in 1850. The city was known as “where cotton meets corn” because of its location along the cultural divide between southern Appalachia’s mountain towns and the cotton-growing regions to the south.

Chattanooga was a major battleground during the American Civil War. Chattanooga functioned as a crossroads for the Confederacy’s arsenals, which were based at Atlanta, Augusta, Columbus, and Macon. The Confederacy’s conveyance of raw materials to processing units, where small arms munitions were produced, was made possible by Chattanooga railroads. Union artillery assaulted Chattanooga as a diversion during the Chickamauga Campaign, and it was seized on September 9, 1863. The defeated Union Army fled to Chattanooga following the Battle of Chickamauga. The Battles for Chattanooga began on November 23, 1863, when Union forces led by Major General Ulysses S. Grant reinforced soldiers in Chattanooga and marched to Orchard Knob to confront Confederate troops besieging the city.

The Battle of Lookout Peak was fought the next day, and the Union forces were driven from the mountain. In the Battle of Missionary Ridge on November 25, Grant’s force routed the Confederates. In terms of Union wins, Chattanooga is one of three crucial occasions that helped the Union win the Civil War. The Confederacy’s winning streak came to an end with the Battle of Gettysburg, while the Siege of Vicksburg divided the Confederacy in half and Chattanooga served as the gateway to the deep south. The Atlanta Campaign, which began just over the neighboring state line in Georgia and moved southeastward the following spring, followed these conflicts. Following the war, the city grew into a significant railroad center.

The biggest flood in Chattanooga’s history happened in 1867, before Congress established the Tennessee Valley Authority (TVA) system in 1933. The water reached a height of 58 feet (18 meters), completely engulfing the city. The highest Chattanooga flood stage since the reservoir system was completed was about 37 feet (11 m), which occurred in 1973. The water would have reached 52.4 feet if there had been no regulation (16.0 m).  Chattanooga was a significant priority in the TVA reservoir system’s architecture, and it is now a major operating priority in the twenty-first century.

In December 1906, Chattanooga was in the national spotlight when the United States Supreme Court ruled in United States v. Shipp that Hamilton County Sheriff Joseph H. Shipp had violated Ed Johnson’s civil rights by allowing a mob to enter the Hamilton County jail and lynch Johnson on the Walnut Street Bridge.
With the United States’ entry into World War I in 1917, Chattanooga boomed; the nearest training camp was in Fort Oglethorpe, Georgia. The 1918 influenza pandemic forced movie theaters and pool halls to close. [22] Chattanooga became renowned as the “Dynamo of Dixie” in the 1930s, inspiring Glenn Miller’s big-band swing song “Chattanooga Choo Choo” in 1941.

Chattanooga became the first city in Tennessee to have a full interstate highway system in the late 1960s, thanks to Mayor P.R. Olgiati’s efforts. With three VHF television stations (WORM-TV (now WTVC-TV) channel 9 (ABC), WRGP-TV (now WRCB-TV) channel 3 (NBC), and WDEF-TV channel 12 (NBC), Chattanooga became one of the smallest cities in the US in February 1958. (CBS).
The same mountains that create a beautiful background for Chattanooga also trap industrial pollution, which settle over the city. The federal government declared Chattanooga to have the worst air in the country in 1969.  Chattanooga, like other early industrial cities, faced major socio economic issues in the 1970s, including employment losses due to deindustrialization, poor city infrastructure, racial tensions, and social divide. In the year 2000, Chattanooga’s population grew by about 50,000 people.

This was primarily due to the city’s annexation of surrounding residential neighborhoods. [30] Local leaders established Vision 2000 in the mid-1980s, a plan to rejuvenate and recreate Chattanooga’s culture and economy. Chattanooga’s population fell by more than 10% in the 1980s, but it rebounded during the next two decades, making it the only large American city to accomplish so.

Downtown Chattanooga in the twenty-first century, as seen from Lookout Mountain.

Chattanooga has developed significantly since the turn of the century, luring residents from around the state and even the country.

Chattanooga created its own typeface, Chatype, in August 2012, making it the first municipality in the United States to do so and the first crowd-funded, custom-made typeface in the world.

Six people were murdered and two more were wounded in shootings at two US military bases in Chattanooga on July 16, 2015. The victims included four US Marines, one sailor, and the gunman.

A school bus carrying pupils from Woodmore Elementary School crashed in the Brainerd area on November 21, 2016, killing six people and injuring 23 others. The driver, a Durham School Services employee, was found guilty of six counts of criminally negligent murder, eleven counts of reckless aggravated assault, seven counts of assault, reckless endangerment, reckless driving, and illegally using his phone while driving in March 2018. The accident revived the debate over whether or not school buses should be obliged to employ seat belts.